“From left to right, as in a photograph, pieces of celebrities to use in the making of one nameless, interchangeable [figure]– or three billion such [figures]– like a photomontage. From head to toe, this synthetic and interchangeable [figure] bears the signs of the times: tinted glasses, electrical wires, boots, rouges, scarves, songs, outmoded or misappropriated accessories, and above all [its] electronic, industrial death with [its] makeup, [its] outfit, [its] sweetness, [its] nondescript precision…”[2]

The cut-up of song lyrics and textual elements of underground cultures in Marseille based author Jean Jacques Schuhl’s book Dusty Pink (1972) is reminiscent of Basile Ghosn’s artistic practice. In a similar DIY spirit, the Marseille based artist creates enigmatic architectures; ruins preserved behind tinted plexiglass. Images from design magazines from the 1960s – 1980s or photocopied in X-Rays of architecture[3] to form collages depicting structures that are at once fragmented and pillars of imagined cities.

These fragmented architectural bodies preserved behind colored plexiglass of varying transparencies and tints reveal Ghosn’s sensibility to the built environment and a certain attention to its fragility. Structures that once, or never, were, abandoned spaces, disproportionate members of iconic design pieces find themselves isolated, layered, severed by duct tape, and entrapped as phantomatic beings, traces of a virile modernity fragilized and, in turn, rejuvenated. This encasement of bursting architectural bodies is reminiscent of Paul Thek’s series Technological Reliquaries (1964-1967) in which hyperrealist wax sculptures mimicked decaying limbs, flesh, organs, were venerated in colored plexiglass cases– a counter critique of the pop and minimalist art of the time. Ghosn’s works can thus be considered as two-dimensional “architectural reliquaries” with their reappropriation of a certain visual plasticity (remnants of Pop) and their veneration of the fragmentary. The words, “Afflict the comfortable, comfort the afflicted,” appeared on a 1985 canvas by Thek. In a sense, Basile Ghosn afflicts the comfortable and comforts the afflicted through an undoing of what we know as a way of revealing what many ignore through a renewed and sensitized perspective that deconstructs regimes of control in architectural spaces. “Everything here now undone,” to borrow the final words of Schuhl’s Dusty Pink.[4]

Basile Ghosn’s process is one of montage that borrows tools and techniques rooted in underground cultures with a certain urgency to produce repeated and multiplied images, to create what Robert Smithson could describe as “[a] zero panorama [containing] ruins in reverse […]a place where machines are idle, and the sun has turned to glass…”[5] The ruin in reverse in the work of Ghosn is one of a synthetic romanticism of the pop music he listens to and the plexiglass that tints his collages, highlighting the structures that he fragments before reconstructing them. Because colors and light are integral elements of this reconstruction that converts the coldness of modernism to a luminous vision of the built world. As the Italian song Occihali da sole (“sunglasses”) from which the exhibition gets its title goes, “If we remove the color, life is a horror.”[6] As for the sun, it, too, becomes entrapped in the works creating a retinal frenzy as we move within the space.

“There are sometimes illustrious strangers.”[7] In the reflections as under the plexiglass surfaces, recognizable strangers appear in the works exhibited. As architectural historian Beatriz Colomina describes the bodies that navigate Adolf Loos’s modernist interiors, the viewers of Basile Ghosn’s works are both “actors in and spectators of the scenes – yet detached from their own space. The classical distinction between inside and outside, private and public, object and subject, becomes convoluted.”[8] Because, “architecture is not simply a platform that accommodates the viewing subject. It is a viewing mechanism that produces the subject. It precedes and frames its occupant.”[9] The architectural bodies and the plexiglass surfaces serve thus as landscapes and mirrors through and upon which we navigate. A simultaneous highlighting and erasure creates surface tensions that confuse our understanding of bodies– architectural and human– and the layers of images in the works.

Just as searching in the sunglasses[10] of someone before you, seeking signs of their gaze that entangles with your own, Basile Ghosn undoes perception in a layering of physical and imaginary spaces marked by fleeting figures that radiate in the sun. 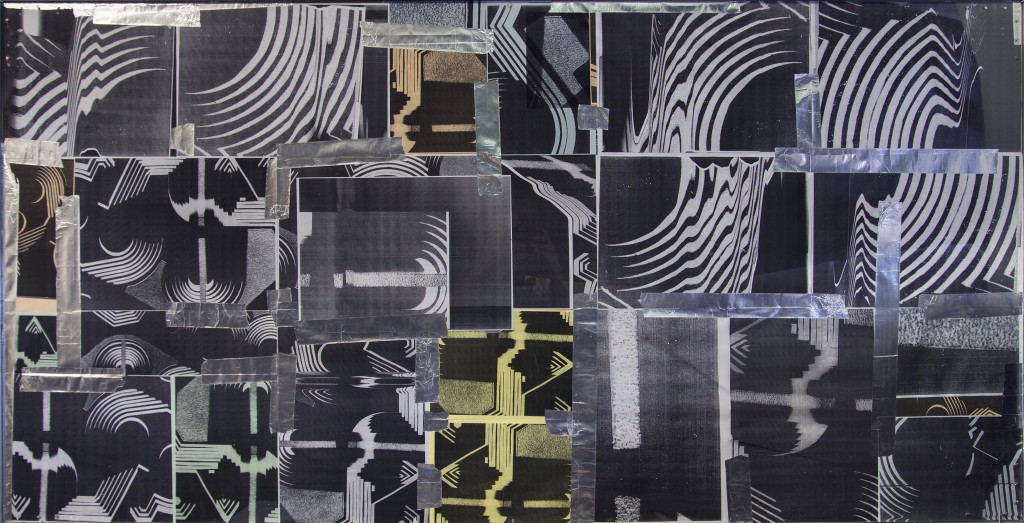